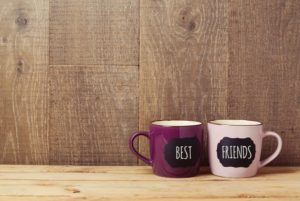 The longer we live, the more friends we lose. Nearly three weeks ago, Leslie, the daughter of one of my longest living best friends, told me that she had placed her mom, my friend, Beverly, in a nursing home. Beverly had dementia. This morning, before dawn, Leslie notified me that Beverly died.

I was introduced to Bev, as I called her, in 1978, by a member of a self-help group. At the time, Bev was an active participant with the group that offered guidance counseling and emotional support for parents, mostly young mothers, but some dads, who found themselves in what they considered a hopeless situation.

During her time with the support group, Bev periodically traveled to various places throughout the city, speaking to parents on behalf of the group. As we bonded, I learned of her personal struggles and shared mine with her. Bev became my confidant and dearest friend, or as the younger generation likes to say, “My bestie.” Little did we know that the friendship we formed would last 42 years.

I was divorced when I met Bev. She was 14 years my senior, yet we were both struggling single parents of young children and we would often commiserate about the difficulty of being a single parent. When will these kids ever grow up, we’d sometimes ask during a moment of frustration?

When we were struggling to earn a living, we didn’t have the time to visit with each other as often as we liked, but we talked on the phone nearly every day. Our conversations sometimes began in the early evening and lasted well past midnight. We discussed everything from our current beaus, to the trials of single parenthood, to when, if ever, we’d be able to retire from the grueling workforce.

Throughout the years, we laughed together. Sometimes we cried together like when her son, Kenneth, was shot and killed by a jealous rival over a young lady. Kenneth, a bright young man, was in his twenties.

Our age gap did not hinder our occasionally hanging out together and when we could manage, we set aside money to do fun things like attending house parties or concerts at Constitution Hall to see our fave, Millie Jackson.

Years later, after our children grew up, married, and made us grandparents, we’d ponder over how fast time had passed and laugh about how it didn’t seem to move at all when they were youngsters.

Bev endured more troubles in her lifetime than I ever have, yet she persevered. I used to tell her that she was the rock, and I was the pebble, and she would say to me, “Girl, you too are a rock. You just haven’t realized it. You are stronger than you know.” Years later, after getting over my own hurdles, when she asked how things were going, and I’d reply that life is good, she would remind me, “I told you so.”

Then, today arrived. We both knew that this day would come. It was only about six months ago when Bev and I discussed how we would cope when one of us died. We promised each other that we would tell a family member to notify whoever survived of the passing of the other. The promise was kept this morning when upon awakening, I saw the disturbing message on my phone from Leslie.

Over the past few weeks, while recalling distant memories of times that Bev and I shared, I have fluctuated between joy and sadness. A best friend represents so many things — a confidant, a shoulder to lean on, and sometimes a relationship that is closer than a sibling. And at any time there may be a reversal of roles between the rock and the pebble.

“A rock, a large piece of rock weathers off a cliff and dives deep into a pool of gushing water. Back washed, it journeys roughly and knocks off other rocks, smashing through the waves as it loses itself in scattered pieces except for its core. That core travels far and wide, it coarsely gets ground by gravel pieces smaller than itself and bullied by boulders all of which it bears up as it withstands the pressure of a distant journey off the shore. At some point, it gets dry and it encounters mud, it gets smeared dirty but the mud doesn’t stick, the rain washes off the mud and it rolls into the sand. It dances in the sand and dives into the bottom of the waves. Rising like a phoenix through the ashes, it emerges polished, looking more beautiful than it did when it got edged of the cliff. It rises a pebble, smooth and sleek. Coveted by rocks starting their dive. To be a pebble you have to run the turbulent tidal race.”  Quote by Victor Manan Nyambala