I think every woman should have a daughter. Take my daughter, for instance. Some might say that when she was a tot, she was a mini-me. But as children do when they grow older, she came into her own. And now the tables have turned. Wherein I used to advise her about fashions and hairstyles, now she encourages me to become more contemporary. That’s difficult to do when you are comfortable being old-school and not much for fakery.

Mind you; I’ve worn my hair in a short afro for what seems like a hundred years; except for a few weeks last year when I deviated from my natural and decided to try something different. Recently, I stepped out of my zone again and accompanied my daughter to her favorite weave salon. After we left there, she jokingly told me that I would probably not be allowed back in that shop, because of the way I “coached” the hairdresser working on my head.

“No, that’s too much hair.” “Uh-uh. That’s too long, cut it down.” “Twist it more to the left.” “I need a style with a bang to cover my high brow.” And those were just some of my well-meaning directives.

Undoubtedly, the thought of grabbing some clippers, shearing off every strand on my head and then saying, “How do you like it now?” occurred to the stylist more than once. But, during the two hours that I sat in her chair while she cornrowed and weaved until I was satisfied (or so she thought), she was professional and patient. And I’m sure the tip I handed her afterward made enduring my complaining worth it.

Need I say that I finally yielded to the suggestion of the stylist and left the shop with a style that I believed had me looking more like Whoopi Goldberg than myself? I had no problem with the cornrows in the back. That’s what I asked for. However, the stylist could not get the front of my hair to look the way it did in a photo that I showed her. In fairness, she tried, but whenever she thought she was done and said, “Nice.” I shook my head and replied, “Ugh. Not so.”

Finally, after growing tired of her snipping and clipping, I relented. The stylist seemed pleased (or relieved). My daughter said it was a nice do. And I felt … well, let’s say that the hairdo is not me. To add insult to injury, my daughter snapped a photo of Whoopi-Me while we were on the way home.

Afterthought:  Years ago, after I left the workforce, I freed myself from being a slave to facial makeup. Just like my daily commute, the every morning application of face paint has become another thing gladly left in my past. Now, I only wear makeup on rare occasions. However, while sitting at my dining room table grumbling over dissatisfaction with my hairdo, even with it swept to one side, and contemplating what to do with it, I had a lightbulb moment.

I decided to see if makeup would make me feel better about my hairstyle, so I applied some. Low and behold, as it often does for most women, the makeup transformed me from I hate it – to – I can live with it. As you can see from the before photos (Numbers 1 and 2) and the three subsequent photos, I look like I feel better about the hairdo. And I do. Nevertheless, I am certain that sometime sooner more so than later, I will wake up one morning and decide that I’ve had enough. I’ll want the real me back, and my ultra ego will stop humming the song from the musical Hair. “Darlin’, give me a head with hair, long beautiful hair.” 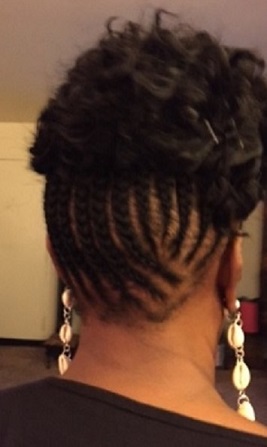 This article is not for seasoned weave wearers. You already know what is involved from the time that weave is sewn into your hair, then removed and another sewn in for as long as you choose to wear it. This is for others like me who are newbies to the process and more comfortable with our own mane.

I can speak to this issue now because I recently got a weave or let’s say a partial one, I’ll explain that later. But before I do I’ll share my experience with you.

It took the strength of Hercules for me to surrender my nonconformist mindset, abandon my short fro which I had worn for nearly 30 years and switch to a contemporary hairstyle. When it comes to trends, I am a traditionalist. But occasionally, I will step outside my comfort zone and try something different.

Curiosity and the desire to try a new hairstyle led me to get my first and probably last weave. I call it a partial weave because I chose a female Mohawk style with twisted braids in the back and wavy curls stitched to my natural hair on top with appropriately placed bobby pins. It took me a day or two to get used to the new look, but I began to like it. Several of my relatives, friends, and neighbors told me that they liked it too. But there was one drawback to my new look. I’ll get to that.

Believe me when I tell you that I dislike fake. Fake nails. Fake lashes. Fake boobs and fake hair. Wigs, I know, are fake hair too, but I exclude them from my list of peeves because some people wear them more out of necessity than for vanity. And I admit, occasionally, when I want to change my appearance, I will wear a short wig.

Honestly, I have no problem with anyone who wants to go full-scale with fakery. Numerous celebrities wear weaves or extensions. Aside from the obvious like Oprah and Diana Ross, there is Tyra Banks, Rihanna, Beyonce, Nia Long, even Kim Kardashian. To see several more celebs who follow the trend, click this link and check out Styleblazer.

My intention is not to belittle weave wearers. I point out some things nearly to cite examples as I share my experience with you. If other folks want to wear weaves, let them weave on and God help them all should some unholy event put the hair industry out of business.

As for myself, I think that the next time I have the desire to temporarily change my look, I’ll just rely on my standby. Pull on a wig. No muss, no fuss, no fake hair sewed into my own, which took nearly 90 minutes for me to remove. But I am getting ahead of the story.

You are probably wondering. Since most weaves cost more than $100, why would I pay the equivalent of a steakhouse dinner including two desserts for a hairdo designed to last for several weeks and then remove it in 17 days? Because I liked the style when I got it and I would have kept it a while longer, except for one difficulty. The darn thing made my scalp itch — constantly.

At first, there was no problem, but after about the 3rd day the itching began. Around the temples, in the back of my head at the neckline (what we black folk often refer to as the kitchen) and finally, I was scratching and poking my head all over trying to relieve the itch. It was worse at night.

The itching was incessant. I tried everything from applying moisturizer to my scalp to frequent massages at points where I could poke my fingertips through the fake hair. Sometimes it got so bad that I went from gently patting my head to slapping it like I was swatting flies. One time, I nearly gave myself a concussion.

Scratching a weaved head is nearly impossible because the hair is so tightly entwined with your natural hair until it is hard to put a finger on the point of the itch. As much as I tried, I was unable to massage the top of my head with both hands simultaneously, but I could and did rub vigorously between each row of braids.

It didn’t matter if I stood in the shower and let cool water run over my head or if throughout the day I applied recommended scalp cleansers and conditioners to the scalp. The itch was a * * * * *.  Nevermind that. Sometimes I got relief by applying a thin layer of Benadryl along the hairline. The itching occurred periodically throughout the day, but night times were agony.

During the three weeks that I had the weave, I felt like my head was suffocating. I began to wonder if I was allergic to fake hair. One night I lay in bed miserable and thinking I am hostage to my hair. I wanted to take back my freedom.

The next day, I carefully and sometimes fervently cut out the weave from the top of my head. Clipping the threads sewn into my natural hair was a challenge because although my real hair is short, I didn’t want to end up with bald patches.

I liked the cornrows in the back and wanted to keep those, but the ends of the cornrows leading up to the crown were intertwined with the wavy curls on top. There was no way to keep the back intact after detaching the weave. I decided that everything had to go like a bargain basement clearance sale.

Afterward, I thoroughly washed my hair thrice (I know, I got carried away washing) and while doing so,  gave my head the best massage it has had in a long time. Suddenly, my scalp could breathe again.

I’ve done some research and learned that it is not uncommon for a weave to cause an itchy scalp. Although my scalp was not suffocating as I sometimes felt that it was, I learned, as I suspected, that lack of moisture and fresh air can cause an itchy scalp. Also, what I already knew was that improperly caring for the hair and scalp beneath a weave could cause mold or mildew to develop, and if left in too long the hair could become matted pulling off when the weave is removed. There is an excellent article on VIBE that gives additional insight on this subject.

Do I see another weave in my future? I’ve learned never to say never. But as for now, I’m back to me, and I’m feeling free.