“No one will ever win the battle of the sexes; there’s too much fraternizing with the enemy.” 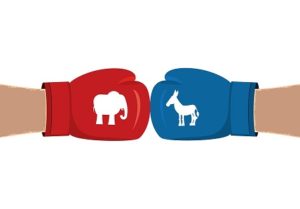 I recently read an article where a guy said that 90 percent of females he encounters in DC are very liberal and seem to view conservative men as walking deal-breakers. When I was in the dating game (nearly 20 years ago before my current relationship), I dated men whose liberal views aligned with mine – except for two who were conservative Republicans.

Back then, I did not discriminate. If I liked a guy who asked me out, I’d date him. My radar has honed over the years, and I am more political than I’ve ever been. In these polarizing and contentious times, for the sake of my peace of mind, if I were still in the game, I would not be inclined to date across party lines. People who date across the political divide can make a relationship work – if they are willing to put in the work. I’m not. It is sometimes difficult enough to maintain a platonic friendship across party lines.

My first Republican flame was a speechwriter for former Secretary of State Henry Kissinger. Kissinger (is one among others) to whom the quote above is ascribed. I began dating the speechwriter on the rebound, following a breakup with my then-boyfriend. After a few dates, I found that I liked the conservative guy. He was a perfect gentleman. He was smart, had a sense of humor, and I enjoyed his company. However, there were a couple of hurdles that intruded in our relationship.

Once, when we were out together, while my date was busy buying tickets I glanced at two black men who were standing about 12 feet away. I guess they were in their late 20s or early 30s. I couldn’t avoid noticing the hateful expression on the face of the one with his arms crossed whose eyes were throwing darts at me. He and the guy who was with him were both wearing black berets. While he was giving me the cold stare-down, I overheard some of his snide comment to the fellow standing beside him. “That sister other there dating a white guy. Ought to be ashamed.” That was in the I’m-black-and-I’m-proud 1970s. Society was moving toward being racially progressive on interracial relationships, but it had not progressed to where it is now. For the next few seconds, I ignored him, until my date and I continued on our way and they went theirs.

Our second tension was more personal. It occurred one evening while we were watching an episode of Roots. The character Kizzy’s master was selling her away from her family for something that she did (I don’t remember what it was) and boyfriend commented that some masters were good to their slaves. Well, Jumping Jehoshaphat! Whether that statement was true or not wasn’t the issue. It was simply the wrong thing said at the right time. Our argument that occurred as a result of that episode wasn’t what led to our break up. We eventually smoothed things over, but I decided to get back with the guy that I broke up with before I got involved with the speechwriter.

The other Republican I dated was black like me. But if you heard him talking smack and couldn’t see him, you wouldn’t know it. He was in the entertainment business and very political. It was difficult enough trying to stomach his political views, but I wholeheartedly resent people who constantly berate members of their own racial group. His arrogance wore me down. It doesn’t matter if the intra-racial bashing is for someone’s job, their political party or because they are blinded by self-hate, in my opinion, constantly stereotyping and denigrating your own racial group does nothing to enhance your image. It makes you look bad. I don’t care whether your viewpoint is due to envy, feelings of superiority or because you think that you are economically and socially better off than other people. Don’t let it go to your head. Life is like a giant sliding board. You can be up at the top one day and down on the ground the next. It doesn’t matter if someone is high on the corporate ladder or picking up trash on the street if a person is out here trying to make an honest living then don’t negate him or her. Actions and deeds aside, as human beings, none of us is better than the other. I strongly dislike seeing black people put other black people down and I view racial animosity with more disdain than partisan animosity. My compassion compass with Republican #2 was not in synch. Thankfully, that pseudo-relationship crashed and burned.

When it comes to mixed-partisan relationships, evidence abounds that Democrats and Republicans have a hard time making relationships work. To the contrary, a high-profile couple, political strategist James Carville and his wife, media personality Mary Matalin are one example of an inter-political relationship that is working. According to USNews.com Martin had this to say about that, “That we disagree on policy was tough, but it’s not one of those deal-breakers. We’re very practical in our local politics, and we’re philosophically opposed on the role and scope of government, but we love each other.”

in “Activism, Race Matters, The Way I See It”
Next Post