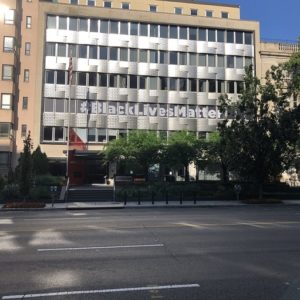 Last Sunday, I took a walk through the valley of the shadow of death. OK, I’m being overdramatic. However, the nearly empty roads along the generally bustling Sixteenth Street corridor resembled a scene from the Twilight Zone. Hardly anyone was on the streets.

Until that day, aside from a doctor’s appointment and a couple of outings to the store, I had not wandered outside my home since mid-March. That’s when the COVID pandemic showed up like an uninvited houseguest and drove everybody into isolation.

My first time taking the 6.04 mile walk along Sixteenth Street happened on 911. Planes had flown into the twin towers in New York, and another crashed into the western side of the Pentagon. Reporters broadcast that a hijacked plane, later identified as United Airlines Flight 93, was believed to be heading to the White House or the U.S. Capitol. Subsequently, that aircraft crashed in a field in Somerset County, Pennsylvania. D.C.’s Metro service had been canceled, and everyone was scrambling to move away from the business district ahead of another anticipated terrorist attack. I had no choice but to take the long, solitary walk home.

I had not rewalked that path since retiring a decade ago. Until Sunday, September 13, Grandparent’s Day, this energetic nana decided to challenge herself, to see if I could still go the distance. My purpose was twofold. I had been yearning to visit the area north of Lafayette Square (nicknamed the President’s Park) since June 5, 2020. On that day, hundreds of demonstrators turned out to protest the murder-by-cop of George Floyd. Later, the defiant D.C. mayor renamed the block Black Lives Matter Plaza.

A longtime history buff, I wanted to visit the area and feel the history. To walk the path and stand on the spot where the late Congressman John Lewis made his last public appearance on June 7, five weeks before his death.

So at 7 a.m. Sunday, my daughter and I leave my home and trek over to Carton Baron. From there, we head south. I’ve lived all my life in Chocolate City, and the scenic, tree-lined 16th Street, bordered by nicely manicured lawns, clean sidewalks, and charming houses, has always been my favorite thoroughfare.

Sixteenth Street runs north-to-south in a straight line. If you start at Eastern Avenue in Silver Spring, Maryland, and go south, you’ll pass picturesque homes, the former Walter Reed Army Medical Center, Rock Creek Park, and Carter Baron. Also along the way are several foreign embassies, including the Embassy of the Republics of the Congo, Cambodia, Lithuania, and Angola.

Near the halfway point of our excursion, we stop briefly in Malcolm X Park. I’ve loved that place since I was a teenager and used to visit there occasionally with my friends. Also known as Meridian Hill Park, the property sits across the street from Howard University’s Meridian Hill Hall. The Hall was one of Howard’s dorms until the building was sold in 2016. The developer plans to convert it to rental housing.

Continuing downtown, we pass Scott circle. Mounted in its center is the equestrian statue of Civil War General Winfield Scott. A short distance away, on the right-hand side of the street, the National Geographic Museum stands temporarily closed. Its windows boarded-up since the George Floyd protests. We go a few more blocks and 90 minutes after we started our trip, we cross K Street and arrive at Black Lives Plaza.

At the entrance of the plaza, on the right-hand side at the corner of 16th & K, stands the Regis Hotel. (Decades ago, when I worked in a government affairs office in the building directly across the street, it was called the Sheraton-Carlton.)

As I stand there, reminiscing, I remember spring 1991. I am watching from the fourth-floor window as Queen Elizabeth and her security detail exit the hotel, climb into her motorcade and drive away. How thrilling, I think at the time, I’ve seen the queen. She was in town then, visiting President George H.W. and Barbara Bush. I later learned that the queen also toured some areas of the city with Mayor Sharon Pratt Dixon and other locals.

It was that same window that I rushed to one morning about a year later, after hearing screams coming from outside. I looked down to see a young woman who I later learned worked for Xerox, being dragged beneath the back wheel of a box truck. Pedestrians screaming and gesturing eventually caught the attention of the oblivious driver, and he stopped the truck a few feet beyond the entrance of our building. Paramedics rushed to the scene and extracted the women from beneath the truck. She survived. News reports revealed that the truck driver, who had numerous prior driving violations and was subsequently fired, said he had not seen the woman when she stepped off the curb. 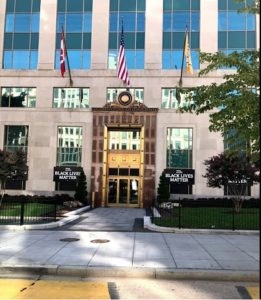 My old workplace building has a new facade and now houses P.J. Clarke’s restaurant. Posted in front of the structure, to the left and right of the double doors, are two large Black Lives Matter signs. Nearly every building on that block and several nearby have signs of assorted shapes and sizes displaying the same persuasive message.

On the same side as the Regis, at the opposite end of the block at H Street, is the historic St. John’s Episcopal Church.

Police cars stationed at both ends of the block restrict vehicles from entering.

There are only about a dozen people in the plaza. In front of the building alongside the Regis, four or five young people are seated in a semi-circle in what appears to be folding lawn chairs. They look as relaxed as if they are socializing in their living room. I wonder if they are some of the numerous activists who participate in the protests that have been ongoing intermittently since the death of George Floyd. (Continued in Part 2)

Soul-Searching with a Cup of Java

in “General, Opinion, The Way I See It”