“In Hollywood a marriage is a success if it outlasts milk.” ~Rita Rudner 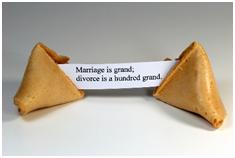 Am I missing something?  Why all of the hoopla over the Tom Cruise, Katie Holmes divorce? Ever since People magazine reported the story two weeks ago, the Cruise-Holmes divorce has received more press than sharply creased pants.

First, we learn about the couple’s divorce. Days later, we hear how quickly and amicably they settled. Meanwhile, we are fed other issues about the possibility that Cruise’s Scientology religion factored in the divorce; that Holmes had lunch with Cruise’s ex-wife, Nicole Kidman; and other relevant – or irrelevant — details of the breakup, depending on your viewpoint. Am I the only one asking myself what’s the big deal? And does anyone really care?

Many celebrity marriages don’t last long enough for the ink to dry on the pre-nuptial agreement. Look at Pamela Anderson and Kid Rock – married for 5 months; or Kim Kardashian and Kris Humphries – 72 days, or Carmen Electra and Dennis Rodman – 9 Days.

There are a number of celebs who apparently took their wedding vows seriously and in some of those instances “til death do us part” proved prophetic:  Ossie Davis and Ruby Dee were married for 56 years; Paul Newman and Joanne Woodward celebrated their Golden Anniversary in 2008, 8 months before Newman’s death; the song writing team, Valerie Ashford and Nick Simpson lasted 37 years; Denzel and Paulette Washington, at this writing are in their 28th year; proof that some celebrity marriages do have staying power. Just as there is a Hollywood Walk of Fame for achievement in the entertainment industry, perhaps there should be  a similar Walk of Fame for marriages with longevity.

Obviously, the rules of hype for the rich and famous differ from the poor and unknown. And the fact that there are more happily divorced couples among the former group, than there are living in wedded bliss, is just not important to the average adult. When ordinary people get married and divorced, the only place where it generates ongoing news is on the family and friends grapevine.

I like the late  Paul Newman’s concept of marriage. Here are some excerpts from his statement as published by ellinée:

[Marriage] is never being too old to hold hands. It is remembering to say ‘I love you’ … It is never going to sleep angry. It is at no time taking the other for granted … It is having a mutual sense of values and common objectives. It is standing together facing the world … It is doing things for each other, not in the attitude of duty or sacrifice, but in the spirit of joy. It is speaking words of appreciation and demonstrating gratitude in thoughtful ways … It is not looking for perfection in each other. It is cultivating flexibility, patience, understanding and a sense of humor. It is having the capacity to forgive and forget …  It is giving each other an atmosphere in which each can grow …  It is establishing a relationship in which the independence is equal, dependence is mutual and the obligation is reciprocal. It is not only marrying the right partner, it is being the right partner.”