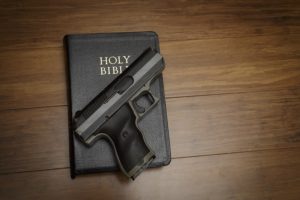 It was early afternoon, a few days ago. I was sitting at the computer in my home office near the window that faces a quiet intersection in our usually serene neighborhood. As I often do during a lull in creative thought, I lean back in my chair, fold my arms behind my head, clasp my fingers together, and thank God for all of my blessings. Suddenly all hell broke loose outside. The silence was shattered by a barrage of what sounded like loud gunshots at least a dozen, maybe two.

Immediately, I did what any cognizant city-dweller would do. I leaped headlong out of my chair onto the carpeted floor. And then it happened again. More shots rang out, only not as many. Unlike the initial volley, this round sounded muffled.

I lay there for a few minutes waiting to hear a blood-curdling scream or at least frantic cries for help. Nothing. As I slowly pushed myself to my knees, the humorist in me had a comedic moment. I thought about the television commercial that shows an elderly person prone on the floor crying, “Help! I’ve fallen, and I can’t get up.”

Fortunately, I could get up, but before I stood, I crawled over to the open window and listened intently. Cars sounded like they were passing along the street at normal speed, not burning rubber speeding away. Some youngsters were laughing across the street near the Charter school. It seemed safe to peek through the Venetian blinds so I did so, all the while praying that a bullet would not crash through the window and shoot me in the eye. As far as I could see – down the street, across the street near the community garden, everything looked normal. People, apparently unshaken by the temporary disturbance, were walking along going about their business. The police precinct is at the end of the block. I figured if those were bullets that I had heard flying, there would have been cops and police cars with flashing lights all over the place.

Later that day, I mentioned the incident to a neighbor who told me that she had just walked outside heading to her car when she heard the first volley and saw smoke coming from the side of the building. “I hauled it back inside as fast as I could.” She said. We concluded that the incident was caused by some wisecrackers, probably school kids who thought it would be fun to set off fireworks and scare the bejeebers out of folks in our sedate neighborhood.

The fear of having to dodge bullets is one of the perils of living in the city; the suburbs are not exempt either. Sadly, many people everywhere don’t feel completely safe anywhere. We live in a state of trepidation.

Facts have shown that it is as easy to be struck by a bullet when you are inside your home as when you are outside. How often do we hear news reports about a bullet crashing through the wall or window of someone’s home and striking an unsuspecting person inside like 12-year-old Badr Elwaseem who was shot and killed while watching TV or the 21-year-old woman whose head was grazed by a bullet that crash into her home while she was sleeping in bed?

Inside schools. At the mall. In church. In today’s violent and chaotic society all sites are fair game for callous persons with weapons. It doesn’t matter where you are when danger arrives, and that reality is emotionally draining.

When you are retired, you know that you have entered into the final chapter of your life. (Don’t let that statement rattle you. It’s true. Accept it. I do.) Every morning when I awake to see a new day, I thank God. As I revealed earlier, I give thanks for all things – big and small – all the time. For every breath that I take. I give thanks.

Some people keep what is called a gratitude journal. Psychology researchers assert the advantage of maintaining a gratitude journal. Their studies indicate that there are psychological and physical health benefits that come from the simple act of writing down the things for which we are grateful; even simple things like being in good health or having a comfortable bed to sleep in at night instead of on a park bench or cold concrete sidewalk. When I can sit down at my computer and write out a blog post within an hour, instead of a stressing over it for days with several rewrites, I say “Thank you, God.”

A growing anti-religious bias makes some people feel like criminals for saying the word, God. Some of you reading this post probably cringed every time you saw the word on this page. I don’t regularly write my appreciation in my journal, but whether I write it or say it in my mind expressing gratitude has become as normal for me as breathing.

As I’ve often said, I don’t support organized religion, but I believe in God, and I express gratitude continuously. Today I thank that Higher Power for the realization that what I heard outside my home the other day were not gunshots. Not that time anyway.

Good and evil. God and guns. Bullets and bibles. Those are the facts of life.

Coffee — If Loving You Is Wrong

in “Lifestyle and Culture, The Way I See It”