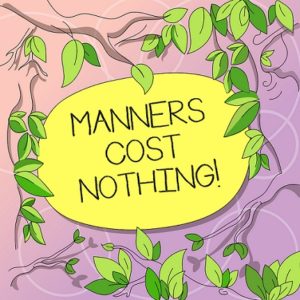 When I was a child, my mother taught me that whenever anyone gave me a gift, it was imperative to thank the person for it. If the gift was a face-to-face delivery, a heartfelt thank you might suffice. But if someone took the time to mail me a gift, the least I could do would be to write them a note or send a card expressing my gratitude. I do that to this day.

I taught that practice of expressing gratitude to my children. And I’ve noticed that many – although not all – people I know who are in my age group were also taught that courtesy while growing up or learned it after they were grown. But from Generation X, the Millennials, Gen Z and on down the line, the courtesy of expressing gratitude in return for a gift, service, or favor is vanishing faster than landline phones.

Are people just out-and-out thoughtless or do they take it for granted that courtesy requires no reciprocal action?

Surely, I am not the only one who remembers that, years ago, if you sent someone a birthday card, a wedding or baby shower present, or even a sympathy card, especially if the card contained a monetary gift, we’d usually receive a thank you card in return. It was rare not to hear anything from the recipient, and frankly, it was considered downright rude. Today count yourself lucky if someone acknowledges having received your gift without you having to ask them if they got it. As I see it, the lack of good manners is just another sign of deteriorating behavior in a society that becomes more uncivil every day.

Lest you make the wrong assumption, I don’t give gifts merely for someone to thank me in return. I do it because either I like the person or want to do something nice for them to recognize a special occasion. But I dislike feeling that my kindness is taken for granted. An acknowledgment is not only the right thing to do, its common courtesy. Unfortunately, I must agree with Whoopi’s implication that we are veering away from a do-right society.

Granted, things get lost in the mail, and packages get stolen off of people’s front porch. But if you live close enough for me to bring an envelope to your home, give it to one of your family members, or slip it beneath your door, then that destroys the “lost mail” defense. And if you do nothing more than holler across the street when you see me, “Hey, I got it!” or give me a thumbs up signal, I might consider that action a bit uncouth, but no acknowledgment is undeniably rude.

The practice of saying thank you is so deep-rooted in me that – you can bank on this – if I receive a gift from someone and do not thank them, then I am either incapacitated or dead.

It’s embarrassing to me to call someone to ask if they received a gift I sent. That’s almost as bad as lending someone something and after months of waiting to have to ask for it back. I can easily overlook giving away a couple of eggs or a cup of sugar, insignificant things like that. Most likely, I’ll say, “Keep it.” But when it comes to lending a household item, let’s say a punch bowl, a hammer, even a book (especially a book) I want it back. It was a loan, not a gift. Judge Judy would attest to that. And wasn’t it Shakespeare who wrote: “Neither a borrower nor a lender be?” But that’s another subject for another day.

Several months ago, I sent a sympathy card containing a check to a long-time neighbor after I learned that her mother had recently died. She didn’t phone or send a thank you note. I’ve seen her in passing at least three times since then and has she ever said thank you? Can a paper doll walk a runway?

We are all busy, so being too busy to say thank you is a lousy excuse, and I’m sure that by now you realize that thoughtless thanklessness of people is one of my peeves. Whether someone holds a door for you or shows kindness in some other way, the least you can do is say thank you. Expressing gratitude is more than just a social nicety it shows civility and reassures others that their gesture was appreciated. That being said – I appreciate you taking the time to read my rant and patronize this blog. Thank you!

Looking Back at The Funeral

in “Family, Journaling/Writing, Religion, The Way I See It”
Next Post

You Can’t Handle the Tooth