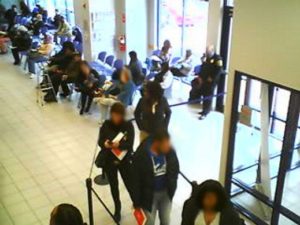 Raise your hand if you enjoy going to the DMV. Come on. Someone. Anyone. No one?

I feel you. It is no secret that most people would rather have a root canal than go to the DMV or any other government agency and have to interact with a civil servant. Although numerous services are now available online, sooner or later you may have to travel that road to aggravation and visit a public service office.

Some folks try to avoid the visit by making a phone call. I assure you that calling and engaging in the press button marathon is often just as exasperating as going there. You dial an agency’s number and the phone rings. And rings. And rings. When and if an automatic answering service responds, a recorded announcement asks you to press or say this number and that number so many times that by the time the number to the extension you need is announced you’ve forgotten why you called. And even when on rare occasions you are lucky enough to get a live person on the line right away, you may be asked, “May I put you on hold while I pull up your records?”

“Sure” you answer knowing that your choices are limited.

Whenever that happens to me, I imagine that the person who leaves me hanging under the pretense of searching the computer files is chit-chatting with the person in the next cubicle about non-job related issues like her date or his score the night before.

A bad attitude seems to be the modus operandi for many civil servants whether they communicate with you over the phone or in person. Do you ever wonder what is wrong with them the reason many display such insolence when all we want to do is take care of business?

Before you presume that I am lumping all civil servants into one barrel of incivility, I promise you that I am not. And I admit that sometimes I am caught off guard when one of the “govies” displays a pleasant disposition.

Following the longest government shutdown in American history, I had a problem with my social security payment. Having no desire to visit the office, I made numerous phone calls to various offices within the department trying to resolve the matter. That futility went on for over a week. Each time I called the Administration an automated service answered, and, of course, asked me to hold on. I’ve learned to always check the clock whenever I am asked to hold. And then I imagine how nice it would be if agencies were required to pay callers a dollar a minute for hold time.

My time is as valuable as theirs, so instead of idling, I would press the speaker button, set the phone on a nearby table or place it in my pocket and go about doing housecleaning, computing, or whatever I needed to do, all the while listening to corny hold music and waiting for an agent to pick up. The longest wait-time I logged one day was 58 minutes, after which – you guessed it, I hung up. Fifty-eight dollars would have been nice compensation for my time.

On the days when a live person finally came on the line that person sometimes transferred me to someone else. I admit that I found at least a couple of the govies were courteous, professional and helpful. Eventually, I got the issue resolved without having to spend 3-4 hours downtown at the agency.

Flashback to the dreaded visit to the DMV. A few weeks ago, after my grandson misplaced his wallet, he had to go to DMV to get another ID card. Before going there, he prepared by heeding my advice. “Carry everything and anything they might ask for to prove your identity and residency so you won’t have to make a return trip.” Birth certificate, social security card, lease, utility bills, bank statement, official mail from any government agency. You might as well throw in the kitchen sink.”

I was flabbergasted as my grandson said he was when he later told me that the experience was “not bad.” No long wait time. No hassling by a disgruntled clerk. A young man who he described as “pleasant” asked for one – yes, only one – of the numerous documents he had brought with him. (Of course, we know that had he only brought one document, he would have been asked for everything that he didn’t bring.) My grandson was in and out of there within 45 minutes. Surely that must be record time for a trip to the DMV.

Unlike private sector businesses where dissatisfied customers have the option of going elsewhere for service, state and local government offices hold the monopoly for dispensing driver’s licenses, passports, and other official documents as well as administering various social services. Civil servants had a reputation for nastiness long before this country entered the “season of being mean.” The question is why are some bureaucrats so darn unpleasant?

Perhaps the answer lies within a study done by Gallup in the summer of 2009. It revealed: “The fact that public employees have stronger job protections, even in nonunion organizations than their private-sector colleagues, makes it more difficult to deal with poor performers.”  Does that give government workers license to treat patrons like crap?

Another study I discovered was done by researchers from USC, Stanford Graduate School of Business, and the Kellogg School. It was conducted to test how power and status determine behavior. “The results showed that when low-status individuals [i.e., customer service reps] are given greater power, they are more likely to abuse that power.” To the contrary, people who hold positions of high power and high status often behave more professionally than those in lower status position. (Of course, as has been evident in the political milieu during the last two years, there is an exception to every rule.)

My early job history included seven years of employment with the federal government before I decided I’d had enough and fled to the private sector. Because the offices where I worked did not involve direct contact with the general public, I did not see much animosity by my coworkers directed against callers. However, I did witness the arrogance that some upper-grade staff members levied against their subordinates, so I easily understand why lower lever workers might take out their frustrations on their clientele.

The next time you absolutely must interact with a civil servant who is providing customer service at a government agency (or any place of business) as soon as you perceive that she or he is about to cop an attitude, disarm the person. Instead of escalating the situation with a put-down, “If your brains were dynamite, there wouldn’t be enough to blow your wig off,” show your pleasant side. I know this may be difficult to do. The urge to give as good as we get is often irresistible, but it’s worth a try. Keep in mind that the person serving you may have nothing to lose, and all you want to do is accomplish what you came for, leave, and pray to God that you never have to return.

in “Holidays, Lifestyle and Culture, Nostalgia, The Way I See It”