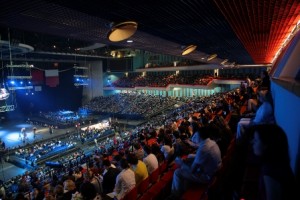 Women learn at an early age that some things require patience – like waiting for Santa Claus, reaching our 18st birthday, and getting tickets for a live television talk show.

There are a few tricks that might get a wannabe audience member into the studio:  stand-by and use chutzpah like the now ex-Salahis; implement a write-in campaign with the determination of a president running for a second term; or sign-up on the show’s website and wait — with the patience of Job. There is another way to get tickets; not just for a live TV show, but for just about anything. It is the ultimate trump card:  have connections. It works for me!

My affinity for quality talk shows began in the early days of Phil Donohue, but my favorite contemporary program is The View. I will tell you about the arrival of my long-awaited opportunity to be an audience member on The View, but first let me share some of my past live studio experiences.

In the early 1980s, I was twice an audience member at The Carol Randolph Show, which was broadcast locally on CBS. Then, on one spring morning, as my son, daughter, and I were enjoying our favorite week-end activity – roller skating in Rock Creek Park – we were filmed by the crew of the weekly TV program Saturday Magazine. The show was producing a feature about single parent families, and my children and I were part of the live studio audience when the segment aired on WTOP in March 1983.

Audience members at live talk shows get the opportunity to see their favorite hosts and celebrity guests in person, as I did at The Carol Randolph Show. Lou Rawls was the singing guest on one show that I attended. Millie Jackson was the other. I visited briefly with both in their dressing rooms. But enough of my horn-tooting, you want to know how to get your own studio tickets, don’t you?  Here is the deal.

If you don’t have a friend who works with the show to hook you up, the best way to get tickets is through the show’s web site. Although the tickets are free, and you will likely get more than one ticket so you can bring friends, most shows have a waiting list of 12 – 24 months. When your name comes up, you may receive a phone call from the audience services department, or you may not hear anything until your tickets arrive in the mail, usually a few weeks before the date of the show you will be attending. For some talk shows, you can find out the scheduled celebrity guests ahead of time; for others you just have to take your chances.

Since talk show tickets are free, trying to get them through ticket brokers may not be an option. Besides those would cost you. Brokers purchase and then resell tickets for a variety of events including sports, concerts, and theaters. That’s the reason a lot of tickets for some events sell out minutes after they are available to the public. Record companies, radio stations, and the media also hog tickets. So is it any wonder that tickets for Justine Beaver’s U.S. and Canada tour – 48 shows – vanished within the first hour of sale?

A close friend of mine who worked at the TV station was responsible for my being an audience member at some of the shows mentioned above. And bless her soul; she got tickets for my sister-in-law and me to be audience members at The Oprah Winfrey Show in November 1986. High five!

A word of caution to aspiring audience members; having tickets for a live TV show does not always guarantee you a seat. Shows frequently over-book to ensure that there are no empty seats, which results when some ticket holders fail to show up.  So, read this next sentence carefully. Just because you have a ticket doesn’t guarantee entry to the show. Say what?  You read it right. Even receiving a verbal or written confirmation does not guarantee your admittance to the studio, so if you must travel to the studio from out of town, book a hotel room, or make other costly arrangements in order to attend a show – think twice, and read the small print on the informational sheet.

Invited audience members are told to arrive 2-3 hours ahead of time and should be prepared to stand outside shivering on a frigid winter day or sweltering in 90 degree summer heat. You can eat while standing outside in line, but are not allowed to eat in the studio.

When the studio opens, you go through security, show a picture ID, and are checked for cell phones and recording devices which you are not allowed to carry inside the studio. The normal dress code for audience members is business casual. Ticket holders who are inappropriately dressed could be seated out of camera view, or in an overflow room where you can watch the program on TV, in which case you could have stayed at home and had a V8. Once the audience is seated and during commercial breaks, a warm-up person preps you on things like how and when to applaud. Because there are limited opportunities to go to the rests room, it is best to go before being seated.

That brings us to The View. After putting in my request and waiting nearly a year, I received a phone call last week from audience services, offering tickets for me and some friends to attend The View’s Halloween Show on October 31st. “Wear a costume,” she told me.  Whoopee!  No, not Goldberg . “Whoopee!” was my exclamation when I learned that my wait for tickets was finally over.

Unfortunately, after much contemplation, I decided to turn down the long awaited opportunity. My disappointment was obvious to close friends who saw my months of built-up anticipation fizzle like a deflating balloon. Pity party. Sadly, I have no connections at The View, so, figuratively speaking; it’s back to the end of the line.

Busting Loose – Shh! For Women Only