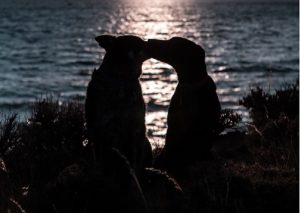 Years ago, I worked with a wonderful man who had a basset hound named Cleo. Occasionally he would bring Cleo to the office. I liked that dog as much as her owner loved her. You know how you hear people say some things that stay with you forever? Whenever Cleo’s master was agitated with some of our business associates following a meeting or phone call, he would say to me privately, “That’s why I like animals better than I like humans.” At the time, I thought that was a rather odd statement, but over the years, I have come to fully understand why he felt that way, and I know other pet lovers who would agree with his statement.

Domesticated animals, particularly dogs, and cats are more compliant and much easier to deal with than people in general. The most agitation an animal will cause is when it chews up one of our favorite slippers or pillows, scratches the furniture, or has an occasional accident inside the home instead of doing its business outdoors. People, on the other hand, are not always acquiescent and tend to frequently get on our last nerve.

Animals, although territorial, tend not to be power-hungry, cantankerous, or disloyal. They give us unconditional love. In human relationships, this precious commodity is almost impossible to find. When our loyal, four-legged companion senses that we are in danger it comes to our rescue. If we are stressed-out, our pet is there snuggling beside us, wagging its tail or purring as if to say, “You’ve got a friend.”

Although I like both cats and dogs, I am partial to dogs, except for a few bad-rep breeds. Advocates of those breeds would have a hissy fit if I called them out, so I won’t, but many of you can imagine which dogs I am referencing. Face it; you rarely hear reports broadcast about a collie, poodle, or some other gentle breed mauling someone to death. (Note, I said rarely, not never.) If you don’t know which vicious breeds I am referring to, use your honest, unbiased imagination or ask Judge Judy. She will unhesitatingly tell you which breeds have the bad-repute.

When I was a youngster, our family had two dogs, during different periods in my life. Our first dog was a beautiful black lab named Tippy. I don’t recall where we got Tippy, but I remember that she was a lovely animal. Below is a photo of Tippy with my sister taken in December 1964. 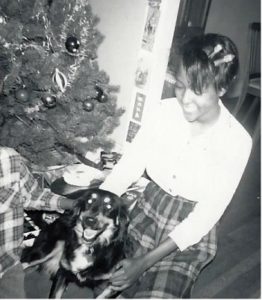 After Tippy, came Muffy. I don’t have a photo of Muffy, so I’ll simply describe her as being a white mutt. She too was a sweet canine. If I remember correctly, my mom told me that a friend of my youngest brother gave that dog to him. That was around late 1967 or early ’68.

I have a memorable event relating to Muffy. She was still a puppy when I brought her outside one day. As I was sitting on the front porch of our family’s home deeply engrossed in a novel. I believe it was Valley of the Dolls. Muffy, off-leash wandered off of the porch, trotted to the end of the block and out into the street. You guessed it; a car hit her. Fortunately, it was a quiet street with very little traffic and not a busy avenue.

Some of the neighborhood kids came running to the house and told me that Muffy got hit by a car. Long story short, a handsome young man around my age had been driving the car that hit Muffy. He stopped, picked her up and was holding Muffy in his arms when I rushed to the scene. Muffy’s right paw was bleeding. He handed her to me and then drove us to a veterinarian clinic which was a few blocks away. Fortunately, Muffy had only a minor leg injury, but through that encounter, I met the greatest love of my life. And although we each eventually went on to live our separate lives, we remained the best of friends for over 30 years. I will always believe that it was divine intervention that led him to visit me one day in May 2001. For about an hour that day, we laughed and reminisced about old times. That was two days before he suddenly died. It is impossible for me to think about Muffy and not remember him, because memories of both are intertwined.

Even stranger is a dream I had recently. My former boyfriend was standing beside his car, which was parked in the middle of the street. The same street near my parent’s home, where he had run over Muffy years ago. In the dream, he is holding Muffy and smiling as I approach them. I return his smile. Muffy with her beautiful, big eyes, looks intently at me but seems quite contented to be in his arms. As I reach out to pet Muffy, they both vanish and I wake up.

I did some research about dreams about deceased dogs and came up with this. Dogs are usually a symbol of loyalty and friendship and often might represent good things in your life. I also discovered this — It could mean that you haven’t gotten over your dead dog and your subconscious mind is trying to communicate this to you. Very interesting, isn’t it? I’m going to leave that right there.

in “Life and Death, Lifestyle and Culture, The Way I See It”
Next Post